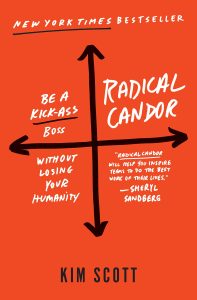 Wikipedia says this about the book:

‘Radical Candor: Be a Kick-Ass Boss Without Losing Your Humanity is a business leadership book written by former Apple and Google executive Kim Malone Scott. In the book, Scott defines the term radical candor as feedback that incorporates both praise and criticism. Unlike radical transparency or radical honesty, Scott says the management principle of radical candor involves “caring personally while challenging directly.” The book was first published in 2017 by St. Martin’s Press. A fully revised and updated version was released in 2019.’

‘Kim Scott is the author of Just Work: How to Root Out Bias, Prejudice, and Bullying to Build a Kick-ass Culture of Inclusivity and Radical Candor: Be a Kick-Ass Boss Without Losing Your Humanity and co-founder of the companies Just Work and Radical Candor. Kim was a CEO coach at Dropbox, Qualtrics, Twitter, and other tech companies. She was a member of the faculty at Apple University and before that led AdSense, YouTube, and DoubleClick teams at Google. Prior to that Kim managed a paediatric clinic in Kosovo and started a diamond-cutting factory in Moscow. She lives with her family in Silicon Valley.’

‘Candor’ – or ‘candour’ as we spell it here in Australia – means to be open and honest.

Those of you that know me know that this is what I’m all about. I aim to be straight-up with my feedback, ideas and solutions. It can be confronting, so I always aim to do it with kindness and empathy.

I have found Kim Scott’s radical candour framework useful not only in my life and how I interact with the world, but as a great visual tool to use with my one-on-one coaching clients. It looks like this:

Ruinous empathy: is what happens when you want to spare someone’s short-term feelings, so you don’t tell them something they need to know. You care personally, but fail to challenge directly. It’s praise that isn’t specific enough to help the person understand what was good, or criticism that is sugar-coated and unclear. Or simply silence. Ruinous empathy may feel nice or safe, but is ultimately unhelpful and even damaging. This is a feedback fail.

Manipulative insincerity: is backstabbing, political or passive-aggressive behaviour. It is what happens when you neither care personally nor challenge directly. It’s praise that is insincere, flattery to a person’s face and harsh criticism behind their back. Often it’s a self-protective reaction to obnoxious aggression. This is the worst kind of feedback fail.

Obnoxious aggression: also called brutal honesty or front stabbing, is what happens when you challenge someone directly, but don’t show you care about them personally. It’s praise that doesn’t feel sincere or criticism and feedback that isn’t delivered kindly.

The impact of these behaviour types:

How you can adopt radical candour

Radical candour isn’t easy. I have to admit that there have been many times that I haven’t been able to be as direct as I’d like. The situation wasn’t right. Possibly the trust wasn’t there. Or maybe I was just aware there wasn’t a willingness to receive feedback. Radical candour needs to be done with care.

Although avoiding these difficult conversations doesn’t help anyone.

Years ago when I was a union official for the Australian Services Union, members would sometimes feel very surprised when they were either made redundant or performance managed out. Often this was because nobody had provided constructive feedback about how they were performing in their role. They weren’t given the opportunity to change or improve – they were just ‘let go’. I wonder how many people could flourish, rather than be ‘let go’, if their managers were able to communicate with radical candour?

Looking for a way to deal with ruinous empathy, manipulative insincerity or obnoxious aggression? Try: